Its skull protrudes from the top of its head, forming bony plates. Its tail is thick, and ends in a knife-shaped protrusion, which is used both offensively and defensively. It uses the plates on its back to regulate its temperature, making Abiorugu able to thrive in a diverse range of climate zones.

It attacks with a combination of bites and tail-swings. It can slam its tail to the ground, dealing massive damage, and can also launch spikes from its tail. It utilizes a flaming breath attack as well that inflicts the Defense Down ailment. When enraged, tips of its back plates turn red.

Abiorugu are notoriously aggressive monsters that relentless try to kill and consume anything that provokes them. They are known to primarily hunt during the day. Although their appetites could be somewhat compared to Deviljho's, Abiorugu are not cannibalistic and have actually been observed hunting with one another in small groups.

They primarily inhabit lush areas like the Great Forest and Jungle, but due to their adaptable and rather nomadic behavior they can be found in the climates of places like the Swamp and Snowy Mountains as well. 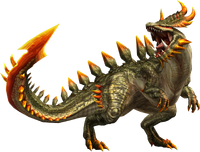 Hardcore Abiorugu have all their body spines, claws, and horns turn orange, the horns and tail blade are also shaped differently.