The Ace Cadet (Japanese 筆頭ルーキー) is the newest member of the Ace Hunters, making him one of the youngest known Guild Knights. 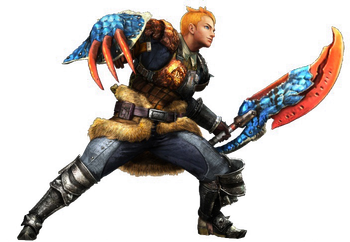 The Ace Cadet is a very cheerful young man that still needs more experience and control. He is known to push his luck in some ways.

He became a member of the Ace Hunters from his rare ability to use and master any weapon type with ease, along with his ability adapt in battle situations. The Ace Cadet also is known to make items quite easily without wasting much time. Not much else is known about the Ace Cadet.

The Ace Cadet has orange hair and usually wears Hunter's Armor with a Velocidrome Bite+. Occasionally, he has been seen wearing Basarios Armor, with a Kaiser Blade, and Khezu Armor, with a Bone Staff.

Retrieved from "https://monsterhunter.fandom.com/wiki/Ace_Cadet?oldid=734580"
Community content is available under CC-BY-SA unless otherwise noted.