The Ace Commander (Japanese 筆頭リーダー) is a Guild Knight that works in secret among the Monster Hunter world. He is the current leader of the Ace Hunters. 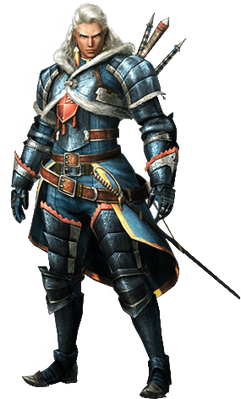 The Ace Commander is described to be a very proud knight. He is honest and serious about his own beliefs, along with others, to a point of being blunt without even talking. It is said that he rarely ever socializes with other people. This means that he can barely even talk to people directly or admit things from his heart. However, feelings of that nature from others can make him understand people better like the Ace Cadet's love for Sophia.

While younger, the Ace Commander was a subordinate under the leadership of the Master. After a Rathian hunt turned into a Kushala Daora attack, the Master retired from being injured in battle and left the Ace Commander as the new leader of the Ace Hunters. Much later, the Ace Commander and his team were investigating an unidentified monster unknown to the public in order to study its unique Frenzy Virus. Eventually, it was discovered that this monster was the juvenile form of a legendary Elder Dragon. After this beast was slain, him and the Ace Hunters were sent to Dundorma in order to help prepare the town for an Elder Dragon attack. After those events, him and his team continued to study Gore Magala, alongside the recently discovered Hyper Monsters.

The Ace Commander has snow-white hair and wears a special armor set, known as Ace Armor.

Retrieved from "https://monsterhunter.fandom.com/wiki/Ace_Commander?oldid=748854"
Community content is available under CC-BY-SA unless otherwise noted.