They are monsters that have been possessed by Qurio, who seek new hosts to feed on. The Qurio can cause them to become violent and extremely dangerous. They first starting appearing after both Malzeno and Gaismagorm are killed during the main story.

Afflicted Monsters' bodies become noticeably darker in color, their eyes become red, and they are constantly shrouded in a dark red aura. Notably, the Qurio surrounds them similar to Malzeno and Gaismagorm.

Unlike Apex Monsters, these monsters are not considered separate from the monster's standard form.

Like Malzeno, Afflicted Monsters can inflict Bloodblight with most of their physical attacks. They have two different states during the fight, the Delirious State and Pacified State.

Afflicted Monster fight like a regular version of their species, albeit they hit harder compared to the normal monsters and can inflict Bloodblight. Once time has passed, they can enter the Delirious State, in which their speed and attack power greatly increased. During the Delirious State, several glowing "Anomaly Cores" appear on their bodies; these cause significant damage if destroyed. Dealing enough damage to the monsters in Delirious State will force them out of the Delirious state, knocking them over and leaves them in a fatigued state afterward. Once destroyed, Anomaly Cores will reappear elsewhere on the monster body overtime throughout the duration of this state.

Failing to pacify Afflicted Monsters in time will cause them to use a signature move called Anomaly Burst, which is an explosion style move that deals major damage as well as inflicting Stun and releasing circling Qurio clusters that deal further damage in a wide area. Also, the lower their health, the faster they re-enter the Delirious State after being pacified.

The Anomaly Researches can be access through Quest Counter. The higher the Master Rank is, the more options are unlocked.

From Ver.11 onward, a new form of Anomaly Researches called Anomaly Investigations were added, completing these quests will unlock new A5★ Afflicted Monsters in the normal Anomaly Quests.

The Afflicted Monsters in the Anomaly Investigations have a randomly-set level, the higher it is, the stronger monsters become. The reward also changes with the level of the quest. The maximum level of the Investigation is increased by completing Anomaly Researches, akin to Hunter Ranks.

Qurious Crafting was a featured added in Ver.11. By using materials gathered from Anomaly Investigations, hunting gear and armor can be upgraded. This allows the option to customizes either stats of gear such as weapon stats and or armor's ability. Additionally, items need for Qurious Crafting can also be obtain at Bahari's Anomaly Research Lab.

Note: Afflicted Materials in Bold can only be obtained from Afflicted Investigation of Lv.31+ 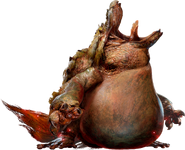