Agnaktor is a Leviathan introduced in Monster Hunter 3.

Agnaktor is in many ways similar to Lagiacrus; both are quadrupedal Leviathans of similar size and body shape. It is noted for its remarkable ability to swim through lava and tunnel through solid volcanic rock (though the rock becomes far more liquid if you go a short distance down). Its body is covered in a lava-like armor which hardens when cooled and softens when heated. It has a drill-like beak which is lined with rows of needle-like teeth.

The Agnaktor closely resembles the Uroktor in essentially every way; the only real differences are the size of the Agnaktor and its ability to get magma to stick to its body. Even the ability to fire blasts of fire are present on both, though the Agnaktor is capable of unleashing a coherent beam.

Its fighting style is similar to that of other Leviathans. It can charge at a hunter and "swim" straight through solid rock in order to smash into them and produce a powerful orange beam, highly reminiscent of the one produced by Gravios. Its skin is coated in lava armor that is usually orange-red, indicating that it is heated and vulnerable, but if it goes too long without using its fire beam or being physically exposed to heat, the armor will cool, and become black and hard. In areas with physical ceilings, it may tunnel through the roof as well as the ground.

Agnaktor are quite aggressive, challenging all others that encroach on its habitat, due to the fact that it has no natural predators at an adult age. The only threat that it encounters is if a monster challenges it for territory or food.

Agnaktor is found exclusively in the Volcanoes of the New World and Volcanic Hollow of the Old World. It is highly adapted to life there, and is at home among the lava pits and rocky slopes. It does not stray from magma- and lava-filled areas. 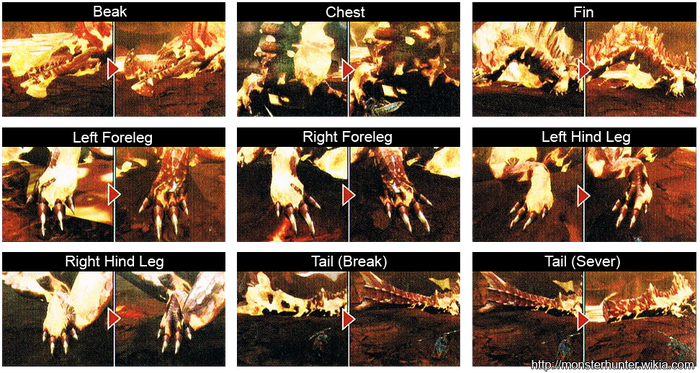