An Airship (Japanese 飛行船) is a flying vehicle commonly used for travel in the Monster Hunter universe. 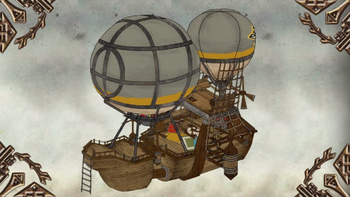 Which Groups Uses the Airships?

Certain corporations like the Hunter's Guild, Royal Paleontology Scriveners, Elder Dragon Observation Team, and Wycademy are the only known groups that use these airships commonly.

What are the Airships Commonly Used For?

The airships have a variety of uses, though are most commonly used for transportation by the general public and hunters. Some airships are used for studying the ecosystem of some locations, such as the Jurassic Frontier, or investigating reports of monster sightings. Some towns are also known to call for airships to bring in needed supplies and other resources.

How Do Airships Survive Monster Attacks?

The airships are made of strong materials that can survive multiple hits from monsters, such as Flying Wyverns. These airships are strong enough to withstand the fiery breath of Rathalos. Some of them have other forms of protection like the Dragonator, Gongs, and ballista to fight off foes. Though they are durable enough against most foes, airships can easily be taken out by Elder Dragon-Level Monsters and Elder Dragons.

What Kind of Fuel Do They Use?

The fuel for an airship can vary. The most common fuel for airships is coal from the volcanic environments, though some use unusual types of fuel like the gas from the inside of a Emerald Congalala.

Retrieved from "https://monsterhunter.fandom.com/wiki/Airship?oldid=786231"
Community content is available under CC-BY-SA unless otherwise noted.