Akantor is a Flying Wyvern introduced in Monster Hunter Freedom 2.

The Akantor is a massive, vaguely snapping turtle-like wyvern that dwells in magma. Akantors are covered with massive reddish black spikes and durable shells, and have both large sharp claws on their legs but also a similar structure on its tail. The Akantor's most distinctive feature aside from its fearsome spikes are the pair of dreadful tusks on its head. These tusks are both nearly as long as the entirety of the head. The underside of the Akantor is a much tanner color than the rest of its body, and is comparatively lacking in dangerous protrusions.

The Akantor is classified as a Flying Wyvern due to its evolutionary line; Akantor is no longer capable of flight, and only has small nubs left of their original wings.

Akantors are so powerful, they can have extremely negative effects on the environment they reside in. Predator and prey flee from Akantors and only the largest wyverns and Elder Dragons even dare challenge them. With their immense physical strength, numerous body spines, enormous tusks, and powerful roars Akantors are extremely deadly foes. If all that weren't enough produced inside Akantors mouth is a highly corrosive fluid meant to break down the defenses of prey, and with its exceptionally loud roars Akantors can create a sort "sonic beam" tainted with the Dragon Element powerful enough to shoot down airships flying by.

Akantors are highly aggressive and predatory - they are shown to be more than capable of taking down a Gravios. They are easily the apex predator of any ecosystem unfortunate enough to witness its presence, and can obliterate many monsters and hunters that dare challenge it. By virtue of its immense strength and ability to burrow through magma, not much can realistically stop Akantors short of another elder dragon or an experienced team of hunters. They will attack and kill almost anything on sight, often letting out a deafening roar before charging head on.

For details on older games this monster has appeared in, see Akantor Guides. 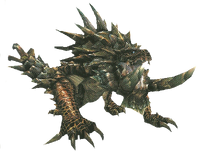 HC Akantor has an unusual blue tint all across its body, as well as even larger tusks than before. In addition, it has a new set of attacks and movement patterns, including producing giant pillars of lava and fire as well as using its sonic roar to cover its body and cause damage to any Hunters too close.