Whereas Akura Vashimu features purple crystals, Akura Jebia is mostly covered in white and blue crystals. It has a characteristic horn on its face that the Akura Vashimu lacks.

Akura Jebia is stronger and faster than Akura Vashimu and is also capable of throwing some of its sharper crystals as explosive shard projectiles. It has an exclusive attack where it leaps before swinging its tail in a full 360 spin, covering an extremely wide area.

Akura Jebia are overall more aggressive and ferocious compared to Akura Vashimu but otherwise share little difference in their behavior.

In contrast to Akura Vashimu Akura Jebia are mainly found in more humid areas like the Swamp and Esther Lake though they can still be found in Desert's.

Whilst Akura Jebia is normally exclusively found in the Swamp, Capcom released a one-day Event Quest on April 1, 2011 where it could be found in the Desert. This Akura Jebia had a vastly enlarged tail crystal, but no other major differences. 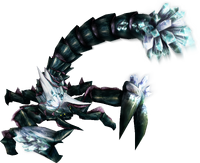