Akura Vashimu is a scorpion-like Carapaceon. The Akura Vashimu has blue-purple crystals growing on its claws, back, and tail tip. It has a huge geode mineral on its tail tip. The Akura rests and hides underground, protruding its large mineral tail tip on the surface. If it is aware of nearby enemies, its tail breaks out of the sand and swings around violently, hurting anything nearby. It is possible to temporarily break the tail crystal, but the geode will quickly grow back. Its attack pattern depends on the color of its blood (grey, red, green, blue).

The huge geode mineral on its tail tip can shoots out a high-pressure liquid of the same type its made from at its enemies, causing them to be covered in the same type of crystals and lose all stamina (like the Chameleos gas effect). It is possible to temporarily break the tail crystal, but the geode will quickly grow back. Its attack pattern depend on the color of its blood (grey, red, green, blue) It begins with grey blood, but once you remove the crystals and break one part its blood will turn greenish yellow, break a second part and its blood will turn blue during this color its possible to cut its tail after breaking another part, but be warned it is fully able to heal and rebuild body parts as long as it still has its tail, but once the tail is cut its blood turns red. It will leave geodes from its tail on ground that when separated from its tail slowly grow until they explode causing crystal status.

Akura Vashimu's diet is mostly unknown but it is known to ambush Genprey possibly for food. To prevent hunters from carving its tail, Akura Vashimu will rather eat its own tail, and recover stamina for itself. Akura Vashimu gather in the desert to breed causing outbreaks in their population.

Akura Vashimu are wide spread living in many habitats but so far only fought in the Desert and Swamp living in the caves where they have large populations.

How to cut Akura Vashimu's tail

Unlike Elder Dragons, where their health must be below a certain level before the tail can be cut, or unlike Nargacuga, where players have to scar the tail, then cut the tip when it's enraged, Akura Vashimu's tail-cutting method is quite unique.

First, its crystals must be broken on head and pincers,then the head and pincers themselves. Next, it must be releasing blue blood, break a last part then it will fall on its back - and only then can the tail be cut at a certain level of health and its blood is flashing blue and red. The severed tail will yield 2 carves tail and tail tip if not broken.

However, when in any other than Grey and Red Blood Phase,  the Akura Vashimu will attempt to recover his lost crystals and broken body parts by releasing the large crystal on his tail and then spray himself with his crystallizing beam. The player will have to redo the part of process it repaired. In essence, allowing him to succeed will mean that there won't be any tail cut.

Unlike normal Akura Vashimu, these variations are always enraged, huffing black smoke. They also always have blue blood and require only one body part to be broken before the tail can be cut. Its paralysis ability is very strongly developed; venom leaks out when it does tail attacks, paralyzing hunters it drips on and those too close to where its tail attacks hit the ground. 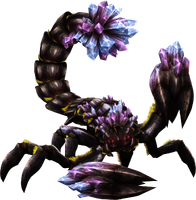 Hardcore Akura Vashimu has a few changes in appearance, including orange eyes and yellow, poisonous hair.

New attacks include producing multiple crystals that over time explode by themselves, purposely running towards one of its crystals and setting it off early, a full 360 tailspin spray and a powerful hipcheck attack. When in the red blood phase said hipcheck attack goes at such force that Akura Vashimu itself will fall over.