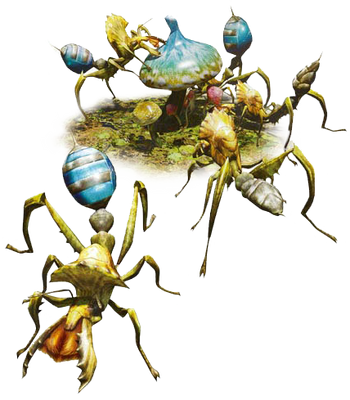 An interesting note about the Altaroth is that they can absorb mushrooms, berries, and other resources into the sacs on their backs. When hunters kill an Altaroth in this state, they will drop a shiny item depending on what they have absorbed. This can be taken to an advantage; if a hunter were to intercept and collect the resource the Altaroth was heading for, before the Altaroth reaches their target, the Altaroth will move on, and can be forced to consume one specific type of plant or mushroom. The hunter can then kill the Altaroth to gain the item dropped. The swelling of their sacs is indicated by different colors depending on what they have eaten.

Altaroth can shoot a greenish-yellowish liquid from their abdomens, which will inflict a temporary defense drop. Aside from that, they will use their large mantibles to attack.

Retrieved from "https://monsterhunter.fandom.com/wiki/Altaroth?oldid=818400"
Community content is available under CC-BY-SA unless otherwise noted.