View source
watch 02:59
Wiki Targeted (Games)
Do you like this video?
Play Sound

The Ancient Civilization (Japanese 古代文明) was a once thriving civilization that mysteriously went extinct some centuries ago. Though this civilization is long gone, many of their achievements still exist as ruins that dot the world, such as the Tower, the Sky Corridor, and the Cloud Viewing Fortress. 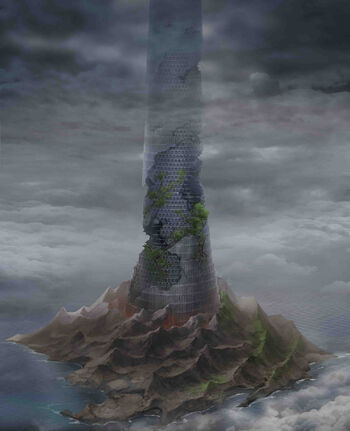 What Is Known About The Ancient Civilization

The ancient civilization was far more advanced than any that currently exist today. Humans made up a part of the Ancient Civilization, sharing a place with many other races. Throughout the lands are ruins which were left behind by the Ancient Civilization, showing that, at their height, they were widespread across the lands of many regions such as the Ancestral Steppe, Jungle, Flooded Forest, and Everwood. In these same ruins are plans and documents detailing many advanced weapons. These plans contained the secrets necessary to make certain weapons that are still used today, such as the Dragonator, along with some secrets about the Elder Dragons, giving the Hunter's Guild a significant advantage over some of them. Some of these documents even contain diagrams and notes detailing here-to-fore unidentified monster species, yet to be catalogued by the Guild. These documents are few and far between however, most having been destroyed during the collapse of the Ancient Civilization. It is the goal of many scientists in the current era to discover a complete archive of Ancient Civilization knowledge, so that at least a measure of the prosperity it enjoyed in its time can be imparted upon the world of today.

The Ancient Civilization was well-known for using monsters for various reasons, from defense to experimentation. They primarily used species such as Flying Wyverns and Elder Dragons for this former purpose, utilizing the bones and scales of these ancient titans to build their mighty structures. These “towers” were usually made from parts of certain monsters, such as the Kushala Daora, though this came at the cost of killing a large number of them. The Ancient Civilization also trained some monsters, in a number of ways, in order to act as protectors for some structures they built. Some of these monsters are believed to still be alive today and continue to have a strong connection with the Ancient Civilization, making them stronger. According to reports from the Sky Corridor, some monsters have been reported with an unusual eerie aura around them that reflects their strong connection with this lost society. Scientists have even found a few unidentified bodies of monsters in some towers, suggesting some unknown monsters might be hiding in its ruins. To support this, Mezeporta's Guild has reported sightings of a mysterious monster attacking groups of hunters with no hesitation on certain floors of the Sky Corridor. Though most monsters were treated like slaves or guards, some monsters were treated equally as well as the Ancient Civilization's society. Thus far, Nefu Garumudo is the only known monster treated like this. Interestingly, some weapons belonging to the Ancient Civilization can be found embedded in or on the bodies of roaming Lao-Shan Lung.

One dark part of the Ancient Civilization's history is The Forbidden Act they committed that went against nature. By using both technology and biology, this society was able to create their own lifeforms by using equipment and materials to build them from scratch. However, this experiment was considered very evil due to one reason: In order to make a new life form, another creature would have to lose its life.

The first new life form they ever made was the Equal Dragon Weapon (Japanese イコール・ドラゴン・ウェポン), or Wyvern Machine Soldier (Japanese 竜機兵), a bio weapon. This life form required about thirty horses worth of dragons, meaning hundreds of dragons were needed to make only one Equal Dragon Weapon. Also, the more blood this titan shed, the longer it would live. Not much else is known about this bio weapon, however, the Hunter's Guild has discovered one dead in a lost warehouse. As of now, they've been studying it.

Due to the Ancient Civilization's lifeforms requiring the death of a massive number of dragons, it angered all the other dragons which inevitably led to a terrible war. The dragons were sick of their kind being used by humanity as cattle and were angered by the fact that humans had forgotten the rules of nature. They had decided to break away from humans and destroy humanity itself. This began a long, violent war between humanity and dragons that spread worldwide, leaving behind mass destruction just about everywhere. Though it is unknown what exactly happened in the war, The Legend of the Black Dragon is said to describe all that happened in the Great Dragon War. This war ended with most of the dragons extinct and with Ancient Civilization gone for good.

The Perfect Enemy For Humanity

During the Great Dragon War, a Perfect Enemy for Humanity (Japanese 完全なる人類の敵) existed and supposedly continues to live within the ruins of Schrade Kingdom. An Elder Dragon known as the Evil Dragon (Japanese 邪龍), or better known as Fatalis. Fatalis was said to have a strong hatred against humanity, and even continues to remember the past of its brethren, including other Elder Dragons and even Flying Wyverns, being killed in great numbers by the Ancient Civilization. It was the perfect enemy for humanity due to its immense power. In a short period of time, without any warning, Fatalis could bring mass destruction to any civilizations it wanted to destroy, such as Schrade Kingdom. If this wasn't enough, Fatalis would also copy Ancient Civilization's inventions for the monsters' own use, though instead of dragons Fatalis used humans. Fatalis would melt the bodies of fallen humans, and hunters, onto its body so it could wear them like they wore its brethren. Though Fatalis isn't known to exist anymore, in legend, When the world is full of wyverns-- The legend is revived-- Meat is eaten-- Bone is crunched.. After living for so long and witnessing so much it is rumored that the original Fatalis, that destroyed Schrade Kingdom, is now a White Fatalis.

Studies on the Ancient Civilization Today

Though this society is gone for good, the Guild continues to research some of the ruins, documents, and other materials the Ancient Civilization left behind. By looking at these ancient articles, scientists are able to gather some more information about their ways. Though they are able to research some materials left behind, this is also very risky as many monsters now call the ruins home, making them quite dangerous to venture into without some type of protection. If that wasn't enough, some traps have even been left behind by the Ancients in order to prevent thieves and treasure hunters from stealing any of their work easily. Thus far, the Sky Corridor is the only known place with still active traps.

One of the recently discovered techniques of the Ancient Civilization was a special ability called the Transcended State (Japanese 超越秘儀). From what has been found about this state, this was used by the Ancient Civilization to make hunting easier. The Transcended State connected them strongly with their society, allowing for their weapons to become stronger, both physically and elementally. If enough hits were applied to a monster, while in this state, a strange elemental aura would appear around the monster, showing its resistances have been lowered, before the hunter would attempt to hit the monster with a single stab of their carving knife. This would cause a number of effects, depending on the weapon in question. For example, if the weapon used the Ice Element than the monster would freeze in place and be vulnerable to more attacks from the hunter. The Transcended State is now being used by some hunters within the Mezeporta District of the Guild. In order for hunters to use this state themselves, they need to read books and do rituals left behind by the Ancient Civilization just to use the Transcended State, just like the Ancients. 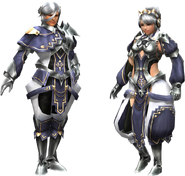