Their bodies are mainly blue with white underbellies and highlights, their wing membranes are blue on top and white on the bottom, with the top also having white flame-like patterns lining the edges. They also have a large dorsal fin and a large tail fin made up of three parts, six small spikes lining each "wing fingers", and crimson red eyes. They also have a few body spines lining their tail and neck and an overall jagged backside, with the largest spine being on top of the head which also features a long barbed horn that heavily resembles the rostrum of a Carpenter Shark.

Anorupatisu are highly adaptable creatures capable of attacking from any angle in their natural habitat, whether in the sea, on land, and in the air. They are fast and with their body spines, claws, and powerful horn are capable of tunneling through the ice with great speed and efficiency, bursting out and tearing any opponents or prey to shreds with their horn. They are also hiding some nasty surprises. They are able to expel and breath out a freezing cold vapor, forming sharp icicle projectiles with just a breath, and when in desperate situations they use a set of organs to produce the dreaded Dragon Element, adding an extra layer of danger to their attacks.

They are ferocious creatures that will likely attack any living thing they see, even members of their own species, this often showing through scars found on their bodies. Their highly adaptable abilities and aggressive nature's makes them the apex predators of the Polar Sea and earning the title of Emperor of the Polar Sea.

True to their title Anorupatisu are exclusively found in the Polar Sea. 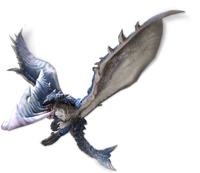