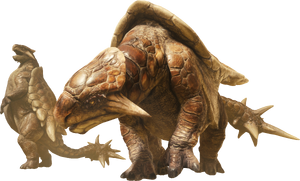 Apceros are Herbivores that appear in Monster Hunter: World. They've developed particularly hard hide to ward off attackers, and are known to gather in groups to defend themselves. They can be found in herds in the Wildspire Waste.

Usually, Apceros attack by headbutting and whipping foes with their spiked tails. They are infamous for their tactic of slowly stalking the hunter, eventually tightly surrounding them, preventing movement.

Apceros are territorial monsters and will attack any intruder on sight. They will not give up fighting until the enemy has fallen or they are dead. Curiously, they work in small herds to take out any threats. They appear not to care if a large monster is in the area.

Apceros appear in the following quests:

Retrieved from "https://monsterhunter.fandom.com/wiki/Apceros/Monster_Hunter_World?oldid=776976"
Community content is available under CC-BY-SA unless otherwise noted.