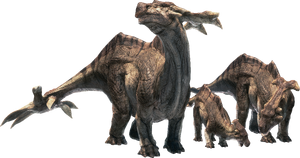 Aptonoth are Herbivores that appear in Monster Hunter: World. These Docile herbivores graze in packs. Their meat is considered a delicacy and is rich in nutrients. If one member of the herd is attacked, the rest will flee immediately. They can be found in the

These docile creatures are hunted for their meat by humans and other monsters. They always travel in groups. When one Aptonoth is threatened, others will run away for safety, but sometimes the alpha male of the Aptonoth will attempt to fight back before fleeing itself.

Aptonoth's appear in the following quests:

Retrieved from "https://monsterhunter.fandom.com/wiki/Aptonoth/Monster_Hunter_World?oldid=776977"
Community content is available under CC-BY-SA unless otherwise noted.