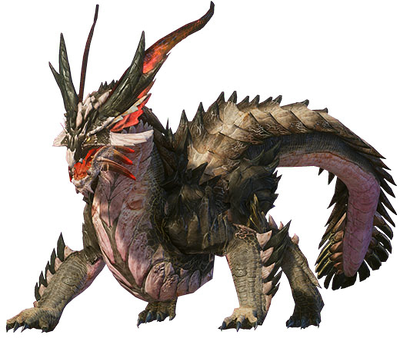 Arbiter Estrellians resemble their relatives, Estrellians and Doom Estrellians, in body structure, but has a black slight dark brownish ash color on the top its neck through tail. It has a darker scale tone on the shoulders and upper legs while the front legs have a grayish color as well as its hind legs, but with a darker tone. Instead of orange scales on its face, Arbiter Estrellian has black scales with three pair of uneven red feather-like spikes on its lower pale jaw.

Like the other Estrellians, it has long fiery antennae, a pair of large white slight curved horn on its cheeks, a pair of antlers that is black and larger than its relative. Its frilled ears are red instead slightly light brown like its relative.

In its armored state, like Estrellians, Arbiter Estrellians has a spiky armor which covered its head, neck, wrists, shoulders, back, upper hind legs, and tail. Instead of a fiery orange, its spiked armor is gray in color and they are actually encrusted Destruction Star Butterflies.

Unlike it's relatives, Arbiter Estrellians begin hunts in their armored state, and their bodies will always be protected by it's butterflies until death.

Although an Arbiter Estrellian's armored state is noticeably more limited then it's relatives' versions, lacking the ability to perform backflip attacks or launch it's butterflies as projectiles, it compensates for this hindrance with it's destructive final charge state. When an Arbiter Estrellian enters it's final charged state, not only does the monster power and speed increase, but many of it's melee attacks gain the ability to steal Hunter Art energy, while all of it's ranged attacks utilizes the Dragon Element and inflicts Dragonblight.

Arbiter Estrellians might be active predators due to it being in its armored state when encountered by hunters. Strangely, It will actively hunt its relatives to either kill them or driving them out of its territory. Interesting enough, after it eliminated its relatives, some kind of natural disaster happens in Arbiter Estrellian's territory, which gives it the nickname, Creator of Natural Disasters.

Its nickname suggested it might be the strongest Estrellian out there.

Like its relative, Doom Estrellian, it lives in the Moonlands and Ancestral Tomb.

Retrieved from "https://monsterhunter.fandom.com/wiki/Arbiter_Estrellian?oldid=797405"
Community content is available under CC-BY-SA unless otherwise noted.