Somewhere in the Siki Country

Argosy Captain (Japanese 交易船の船長) is a sea trader that travels the world for riches and rarities. 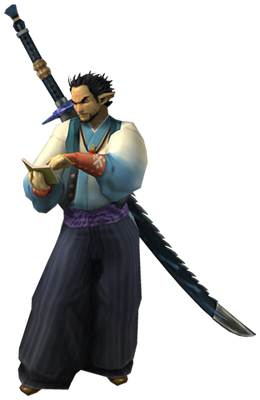 At heart, the Argosy Captain is truly a businessman that has a charm about him that draws in consumers.

Though not much is really known about the Argosy Captain, he said that he was born in the Siki Country. For the past few decades, he has been traveling the world and making trades with other lands for rarities in the world. He travels the great seas with his mighty ship as it sails through many hazards. With the help of his trusty crew, such as Neko, the Argosy Captain gets through most of the hazards with ease. However, the one thing that can stop his ship occasionally is monsters. Monsters like Lagiacrus and Zamtrios have been able to send his ship crash landing onto shore in the past. Though some monsters have been able to do this to his ship, he doesn't just seat by and let them destroy it. The Argosy Captain is known to jump off his ship and face any monster that dares attack it head on, while his crew sail the ship to safety.

He wears indigo pants with a purple strap and a blue-white kimono. He is known to carry a Barbarian Blade with him at all times for protection.

Retrieved from "https://monsterhunter.fandom.com/wiki/Argosy_Captain?oldid=748860"
Community content is available under CC-BY-SA unless otherwise noted.