Arrogant Duremudira greatly resembles the third form of the standard Duremudira, but has some key differences to set itself apart. Its scales are a sparkling silver as opposed to dark blue though the grey ones remain, and it has electric blue stripes and spikes around its body replacing the ice shards. Its eyes are blue instead of orange with glowing white pupils. Two of its horns are black while the other two are white. The wing membranes are dark grey with silver line patterns. And throughout the fight static can be seen radiating off it every so often, while electricity can often be seen being emitted from the feet.

Arrogant Duremudira fights similarly to a typical one in its third phase. However many of its attacks are absent, with those that remain that use ice being replaced by electricity based attacks, and a few attacks such as its beams being tainted with its poison which otherwise goes unused. In addition to this Duremudira is overall faster and has some new combo based attacks, such as a quadruple beam attack, one forward, to the left, the right, and finally a sweeping beam, or a double claw slam plus spins into a forward beam, or just chaining some of its existing attacks into very quick charges towards hunters.

Arrogant Duremudira much like the typical one is incredibly aggressive, attacking anything that enters the Sky Corridor immediately on sight.

Arrogant Duremudira have only been known to inhabit the Sky Corridor. 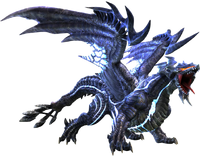