Arzuros is noted for its turquoise colored fur and ursine body structure. It has a ridge of erect hair aligned with its nose. Its back is made of a tough hide, somewhat characteristic of a carapace. Hair runs from its cheeks, connecting to its back, where it forms a trim along the sides of the back. The claws of an Arzuros have elongated, red nails. Each claw has a tough brace encasing and protecting the wrist and forearm. Arzuros has large, bulky legs connected to much smaller feet and a short, wide tail.

Arzuros is armed with two vicious claws which it uses for most of its attacks. It can use its large body and surprising agility for charge attacks and pinning down prey.

Arzuros are omnivorous creatures that enjoy feasting on fish and honey. When eating honey, Arzuros pays little to no attention to its surroundings. When threatened by other large monsters, Arzuros will try to use its size and claws to frighten the monster, or will use its agility to escape. Arzuros often hangs its tongue out of its mouth.

Arzuros enjoys the lush environments of the Deserted Island and Misty Peaks, where it has access to piscine food sources and an abundance of honey.

This section contains data of Arzuros in Monster Hunter Rise. For information in other games, see Arzuros Guides.

This section is about monster materials obtained from hunting Azuros in Monster Hunter Rise. For a list of acquistion chances, as well as carves in other games, see Arzuros Carves. 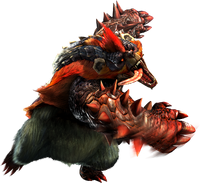