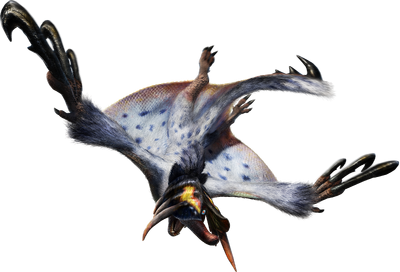 In contrast to the bright orange pelt of the normal species, it has a washed blueish fur with black coloration on the hands, feet and head. The mask on its ears has a yellow-orange pattern on a dark background.

This subspecies seems to be able to spit flaming projectiles at its foes, rather than the watery globules of its common counterpart.

Ash Kecha Wacha can be found at the Ancestral Steppe, Everwood and Primal Forest.

During the localization process, the translation team decided to name the Kecha Wacha subspecies in a way that encapsulated both its coloration and its fire element. They decided on Ash Kecha Wacha as it combines them both in a single, simple word.

Retrieved from "https://monsterhunter.fandom.com/wiki/Ash_Kecha_Wacha?oldid=849887"
Community content is available under CC-BY-SA unless otherwise noted.