The body of Astalos is mostly covered in sharp, dark green plating, though it has a more bright-colored underside. Unlike most Flying Wyverns, its wings resemble those of an insect, more specifically a Glasswing butterfly. Its tail makes up almost half of the monster's length, and has two pairs of pincers at the tip, similar to an earwig. It has a relatively small head, with a large horn on top of it. Its eyes are red, but occasionally turn green when it is charged.

Astalos is hyper-aggressive towards Hunters and other monsters alike.

Astalos can generate green electricity by moving and rubbing its body parts, in which it can release this electricity from its wings, tail, and horn. Its wings have sharp claws, which it uses in ferocious dive-bombing attacks. It can paralyze prey with a strike from its tail, as well as fire bolts of electricity from it. Its horn can create a blade-like current of electricity, which extends the range of its horn attacks and also imbues them with the Thunder element. It can also breathe blasts of electricity which can split into two pillars upon impact with the ground.

Astalos has been seen inhabiting places like the Verdant Hills, Marshlands and Ancestral Steppe. 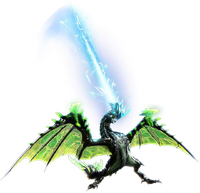