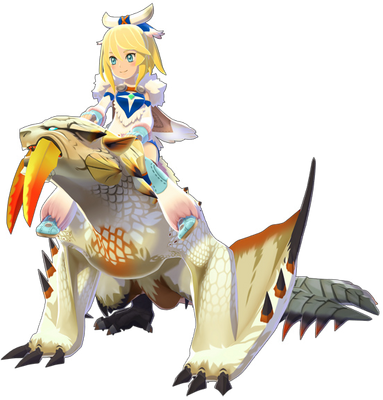 Upon first encounter, Avinia portrays a cautious if not distrustful personality who tries to hide her feelings. However, she is shown to be kind and loyal to those she acknowledges as her friends. She shares a close bond with her Monstie, Frostfang.

Like the Player Character, Avinia originally came from a village of Riders that isolated itself from the world. Her village was tragically destroyed by the Black Blight leaving her the only survivor along with her Monstie. She would then seek out the Channeler to perform the Rite of Channeling until she is attacked by a Khezu and flees until she is saved by the Player Character.

Avinia is young girl with blue eyes and blonde hair tied in a ponytail. She wears a white armor similar to Barioth Armor. Her Kinship Stone is attached in the center of her chest.

Barioth, Frostfang the Barioth is her only Monstie in both the anime and game. It has been with Avinia ever since her village was destroyed. In the game, it goes through a Rite of Channeling to withstand the heat of Dovan Volcano. In the anime, it goes through the Rite of Channeling and obtains the genes of a Silver Rathalos. Frostfang is able to perform the Kinship Skill, Ground Cyclone

Retrieved from "https://monsterhunter.fandom.com/wiki/Avinia?oldid=814823"
Community content is available under CC-BY-SA unless otherwise noted.