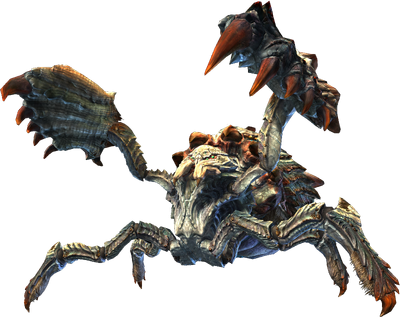 Its back seems to be either a pattern that looks like a monster's head, or a skull of an unknown monster. The eye sockets on its back turns red when enraged.

Baelidae uses its large claws to attack and knock down enemies. These claws are Baelidae's primary means of attack, but it is also capable of spitting out a silk like substance.

When Baelidae spits out silk, it can also leave silk trails on the ground. If the hunter walks over these, they will get Silked. It can also use its silk to swing itself around while hitting enemies with its large claws.

Baelidae can be seen within the Hermit Forest. 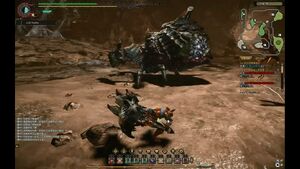 Retrieved from "https://monsterhunter.fandom.com/wiki/Baelidae?oldid=666948"
Community content is available under CC-BY-SA unless otherwise noted.