Baleful Gigginox is a Flying Wyvern and a Subspecies of Gigginox introduced in Monster Hunter Portable 3rd. 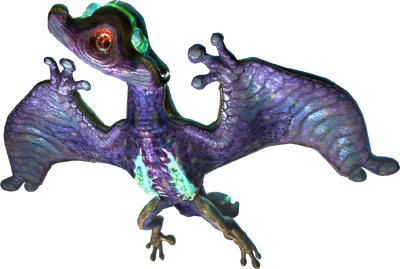 It is golden colored on top and a dark bruise-black color on its underside, and its heat-sensing organs glow green instead of purple, unlike the normal Gigginox.

It also uses Thunder and Paralysis instead of Poison. When enraged, its golden skin turns a bloody red color reminiscent of the Red Khezu. Instead of poison blobs, this Gigginox produces electrical blob sacs that explode. It can also generate electricity over its whole body in a similar manner to the Khezu.

Baleful Gigginox are highly aggressive and territorial. These wyverns will not tolerate smaller predators such as Great Baggi and Baggi near their lairs and will kill with extreme prejudice.

Like normal Gigginox, the Baleful Gigginox lives mainly in the freezing caves of the Tundra.

Retrieved from "https://monsterhunter.fandom.com/wiki/Baleful_Gigginox?oldid=862386"
Community content is available under CC-BY-SA unless otherwise noted.