View source
watch 02:19
Wiki Targeted (Games)
Do you like this video?
Play Sound

Barnos is a Wingdrake first introduced in Monster Hunter: World. These Fervid wingdrakes have flourished under harsh living conditions. They target intruders with a unique acidic agent, and then attack as a swarm. They can be found in small packs in the Elder's Recess. Their materials can be used to craft the Barnos Jacket.

Barnos are wingdrakes that resemble retro-style pterosaurs. They have pointed beaks filled with teeth and large draconic wings. 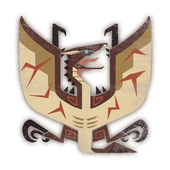