Barroth is a Brute Wyvern introduced in Monster Hunter 3.

Barroth is a large, bipedal monster characteristic of the Brute Wyvern class. It is noted for the large crown structure atop its skull, which houses its nostrils. Its body is covered in rigid plates that help protect it from the harsh desert environment. Barroth possesses a pair of small red eyes and a mouthful with numerous long, peg-shaped teeth.

Barroth is capable of using its heavy head as a plow to smash through the environment, as well as cause damage to any living thing caught in its way. Because its nostrils are located on top of its head, Barroth can almost completely submerge itself in the cool mud during the scorching desert days.

It will occasionally roll in dirt and mud to cool off from the hot desert sun. Although docile by default, Barroth becomes extremely territorial when disturbed. It will release an initial warning roar. If that fails, it will continuously attack until the threat is exterminated. An insectivore, it is known to attack Altaroth nests in order to feast on the occupants inside.

Barroth is uniquely adapted to a hot desert lifestyle, and as such is almost exclusively found in locations that are such, like the Sandy Plains, Wildspire Waste, Dunes, and Trese Desert. Despite all this, they can on certain occasions be seen in cooler areas, like the Deserted Island. 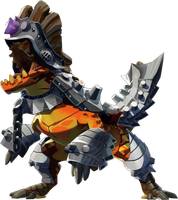 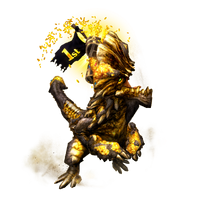 Retrieved from "https://monsterhunter.fandom.com/wiki/Barroth?oldid=857815"
Community content is available under CC-BY-SA unless otherwise noted.