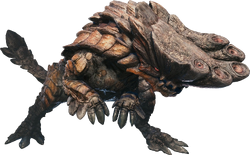 Barroth is a Brute Wyvern that appears in Monster Hunter: World This monster seek out ants, their favorite snack, and mark their territory with mud. They attack potential rivals with their devastating charging attack. They can be found in the Wildspire Waste. Their materials can be used to craft powerful non-elemental weapons and the Barroth Armor Sets.

Barroth is the target of the following quests:

Barroth uses its heavy head as a plow to smash through the environment and any living thing caught in its way. Because its nostrils are located on top of its head, Barroth can completely submerge itself in the cool mud during the scorching desert days. While it uses hardened mud as armor, Barroth can also fling it off its body as an attack. Use water element weapons or your slinger to gradually knock off its mud. Barroth's legs can now be wounded.

It will occasionally roll in dirt and mud, possibly to cool off from the hot desert sun. Although docile by default, Barroth becomes extremely territorial when disturbed. It will release an initial warning roar. If that fails, it will continuously attack until the threat is exterminated. An insectivore, it is known to attack Carrier Ant nests in order to feast on the occupants inside.

The following is a complete weapon list for Barroth weapons: 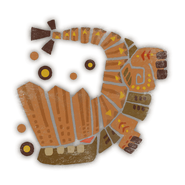 With Diablos
Add a photo to this gallery
Retrieved from "https://monsterhunter.fandom.com/wiki/Barroth/Monster_Hunter_World?oldid=780870"
Community content is available under CC-BY-SA unless otherwise noted.