Basarios is a flying wyvern with rocky, moss covered carapace and the juvenile form of Gravios. Its hard, stone-like carapace, which is even harder than their adult form, is used for protection against predators, and double up as an effective camouflage when Basarios partially buries itself in the ground. Basarios is a slow mover due to its weight, and although it has wings, it rarely uses them to fly. Even when it does, its weight allows it to fly only for a short time.

Basarios is able to release either sleeping or poisonous gas from its underside and, on extremely rare occasions, a fire plume. It is also known to occasionally unleash a very powerful lava beam. It can also hurl balls of fire in a similar manner to Yian Kut-Ku, although it prefers to charge towards adversaries.

Basarios can burrow underground, exposing only its back, giving it the appearance of a large gray rock, camouflaging with the environment.

This section contains data of Basarios in Monster Hunter Rise. For information in other games, see Basarios Guides.

In Monster Hunter Frontier Online Season 9.0, a 'Hard Core' Basarios is introduced. They have a branch in one of the rocks on their back, bright blue eyes and purple stains around their stomach pores.

These unique Basarios can now fire 3 heat-beams in rapid succession, followed by a burst of poison gas; they can roll-over to try to crush the hunter, and emit poison at the same time; they can dig and partly re-emerge to spew a powerful ball of fire; they can also leap at the Hunter. Their normal fire-ball attacks are also now much improved. 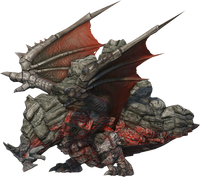 A Variant of Basarios that appears in Monster Hunter Online.

This section is about monster materials obtained from hunting Basarios in Monster Hunter Rise. For a list of acquisition chances, as well as carves in other games, see Basarios Carves.