Becky (Japanese ベッキー) , the Minegarde Sweetheart, is a Guild Receptionist, and secretly a Guild Knight, found in Minegarde Town and occasionally Kokoto Village. 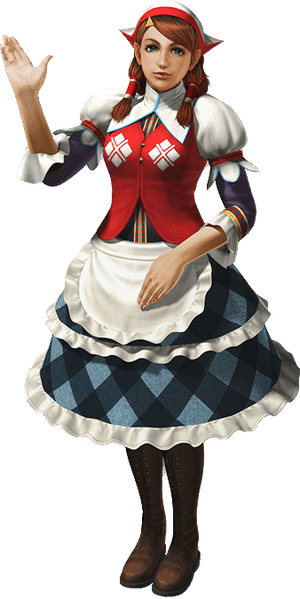 She doesn't really like to work much, though she can be quite rude towards people yet friendly.

Though she is a Guild Receptionist, Becky is secretly an elite Guild Knight. She sometimes investigates the room of hunters and kills those that break the rules of the Guild with a single smash of her Hammer. She also occasionally goes out on hunts by herself.

She is known to wear a red Maiden Uniform.

Retrieved from "https://monsterhunter.fandom.com/wiki/Becky?oldid=748869"
Community content is available under CC-BY-SA unless otherwise noted.