Berserk Tetsucabra are Amphibians and a Subspecies of Tetsucabra introduced in Monster Hunter 4 Ultimate. 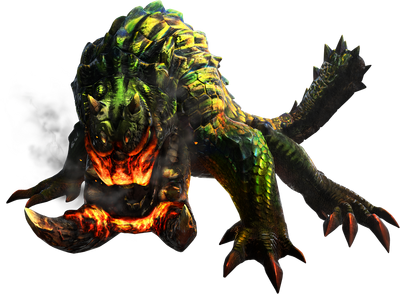 Berserk Tetsucabra has a dark green body with a grey tail and brown tusks due to the soot and gas from the explosions caused by explosive rocks. The monster's face will also become orange from each explosion as well.

While the attacks displayed so far look similar enough to the normal Tetsucabras; this subspecies is clearly more violent and destructive. They are able to easily crush explosive rocks with their jaws to create a wide-radius explosion.

Berserk Tetsucabra can be found in the Sunken Hollow, Everwood and Volcanic Hollow.

During the localization process, the translation team struggled to come up with an English term which had a similar meaning to the Japanese word "aragoto", which refers to the exaggerated Kabuki acting style wherein actors behave loudly and erratically. Eventually, they decided on "Berserk", as it was an adjective which was easy to understand and properly summarized the monster's wild, no-holds-barred fighting style.

Retrieved from "https://monsterhunter.fandom.com/wiki/Berserk_Tetsucabra?oldid=795249"
Community content is available under CC-BY-SA unless otherwise noted.