They are green in color with a large grey horn, yellow manes, several blunt peg like spines on their backs and tails, and most notably long whip like fingers ending in small hooks with two similar hookless tendrils hanging from its waist.

Berukyurosu is able to shoot a linear lightning beam from its mouth. The beam itself is very similar to that of the Rajang amongst many other electricity based attacks like a electricity coated gliding attack, or a tail slam that sends two sparks racing across the ground. Berukyurosu is highly adept in aerial combat, able to do even more difficult maneuvers than the Kushala Daora.

Berukyurosu has the ability to learn patterns of attack from hunters and will counter it, or will attack/evade accordingly. It will also change behavior depending on what weapons are used and what quest it's in When enraged, the mane will turn red, and it will fly into the air to attempt a dive bomb capable of unleashing a massive explosion of thunder.

It will also make use of its whip like fingers swinging them around with a swing of its wings or coating them in electricity.

They are very intelligent monsters being capable of adapting their fighting style to all sorts of scenarios. Outside of this they share the aggressive and territorial behavior of many other Flying Wyverns.

Berukyurosu inhabit areas like the Gorge mostly, but have also been sighted at the Tower and in the Forest and Hills area. 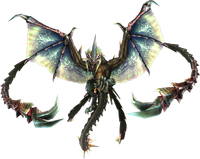 First able to be encountered at SR81

Changes in appearance including the majority of its body color is more blue along with all its hair, spikes are bright yellow tipped, its long quill-like appendages are more thick, all its spikes are longer and more developed, the claws at the tips are greatly increased in size and are double tipped.

A very powerful variation, HC Berukyurosu, is even more deadly than the common Berukyurosu.[1] Using more of its deadlier attacks more often and new attacks that devastate hunters who are unprepared including a combo where Berukyurosu follows a target while it sweeps the ground with its long whip like appendages twice followed by a jump into the air where it hooks its appendages into the ground and pulls itself down smashing the ground and making its Thunder Sky Slam previously only done when entering rage.

At SR100, HC Berukyurosu gains a new attack where it flies high into the air and a thin red light comes out of its mouth aiming down below, followed by a beam more wide than the monster itself that its moves horizontally attempting to kill its target. If it's not in rage mode, it will gently fly down or if it's in rage mode, it will crash down with its Thunder Sky Slam.