Black Diablos are female Flying Wyverns and a Subspecies of Diablos introduced in Monster Hunter G.

The designation as a subspecies is somewhat of a misnomer, as Black Diablos are simply female Diablos in heat. Their shell turns black during mating season to warn other monsters of their heightened aggression and hostility. It is not possible for a Black Diablos to be male.

Highly aggressive, even for such a large wyvern. Diablos are considered one of the most aggressive creatures in the Desert. Using the sand as cover, Diablos can launch devastating ambushes on intruders approaching their territory. Black Diablos behave like a normal Diablos while fighting. She is a highly territorial wyvern, and will attack members of their own species if they enter her territory, and they will also attack other monsters like the Tigrex should they approach.

Commonly found in Deserts. Black Diablos are well suited to arid climates, but her ability to tunnel in sand may limit her to deserts only. However in Monster Hunter 3 Ultimate, she can be found at the Deserted Island during times of extreme heat and drought in the Sandy Plains. 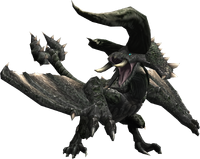 Unusual possibly mutated Black Diablos with bright blue eyes, purple flesh and mouth, more spikes all over its body and tail, large veins on wings, one horn very much larger than the other and increased muscle mass.

She has increased aggression, speed and strength able to make quakes that require Quake Resistance+2 skills just from her digging normally. This leaves many hunters instantly defenseless towards her digging attacks.

Her new attacks are fast and deadly including a new charge that is not horns to the ground first and unpredictable where it suddenly runs towards a target homing at high speed then hops landing horns first sticking them in the ground as it slides and then lifts its head and up very fast. This move is actually performed so fast it gives little time for hunters to use recovery items.

She has new behaviors when she charges normally as well such as ending her charge with a tail spin then double tail slam. Or a new tail attack shared with HC Monoblos where it slams her tail and uses its own tail weight to slides herself in the direction of her tail twice.

Another attack Shared with HC Monoblos is where the monster slams her chin on the ground making a strong quake requiring Quake Resistance+2 skills to ignore hoping to catch prey unable to move she instantly raises her head upward while sliding forward hitting all who was stunned by the quake.

Digging speed is increased to instant it digs into the ground it may begin chasing. And using a Sonic Bomb on the monster will instantly cause it to get enraged making sonic Bombs useless during its anger.

She is at SR100, one of the fastest of Diablos variations going at possible double speed in rage and repeating its already fast new charge attack and increased speed digging leaving very little time for hunters to use recovery items in the same room of the monster if faced alone.