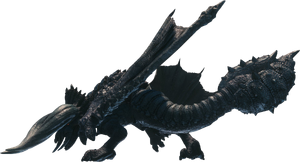 Black Diablos are Flying Wyverns and a Subspecies of Diablos that appear in Monster Hunter: World. These black-shelled Diablos are actually female Diablos in heat. The color signals their aggressiveness and heightened hostility to other creatures in their habitat. They can be found in the Wildspire Waste in High Rank only. Their materials can be used to craft extremely powerful non-elemental weapons and the Diablos Nero armor sets.

Highly aggressive, even for such a large wyvern. Black Diablos are considered one of the most aggressive creatures in the Wildspire Waste. Using the sand as cover, Black Diablos can launch devastating ambushes on intruders approaching their territory. They are highly territorial wyverns and will attack members of their own species if they enter their territory. Being in heat increases this aggression even further.

In combat, Black Diablos are much more mobile and aggressive than their normal counterparts. In addition to the usual leaping charge, they have an aimed charge attack that inflicts Stun on hit. Black Diablos can have Turf Wars with Rathian, Pink Rathian, and regular Diablos. It wins against the first two and the latter's winner is randomly decided.

Black Diablos appears as a target in the following quests:

The following is a complete weapon list for Black Diablos weapons: 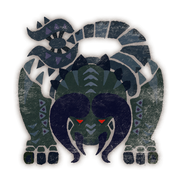 With Diablos
Add a photo to this gallery
Retrieved from "https://monsterhunter.fandom.com/wiki/Black_Diablos/Monster_Hunter_World?oldid=777839"
Community content is available under CC-BY-SA unless otherwise noted.