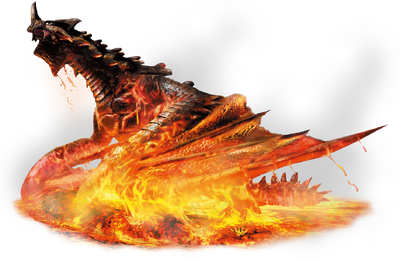 Black Gravios are quite daunting in relation to the size of hunters compared to normal Gravios so do take note of the tail and charging attacks. They will cover a larger area than their normal species.

They only rarely use the sleeping gas that normal Gravios use; they usually only emit explosive red gas. They have a heavier shell than the normal Gravios. Just like the Gravios, their stomach can be broken twice, allowing hunters to cut through without bouncing off.

Far more aggressive than its grey counterpart, the Black Gravios will attack on sight, starting with either a fire beam or a charge attack.

Black Gravios are known to inhabit in Swamp and Volcano, where caves and ore deposits are easy to find. The extreme difference in local temperature, with the swamp so cold and damp when compared to the volcano, means that Black Gravios is not dependent on extreme heat.

Much like HC Gravios appears to just be a older version of standard Gravios same goes for HC Black Gravios. Though unlike normal HC Gravios the insides of this monster are burning hot like magma to the bone and it needs to vent heat more often to keep its temperature in check.

It has all the attacks of normal HC Gravios and uses the super beam attack more often along with new attacks. New attacks include making use of the pores on its tail to release flaming hot gas and sleep gas in a tail slam attack and the amazing ability to keep its self in the air while flying using its beam aimed strait down like a rocket to keep its self in air while spinning ending with a body slam and releasing the heat from the ground that it beamed as magma from burning the ground. This odd ability makes it the only Gravios variation that actually uses its wings for a actual flying attack instead of just a jump smash.

Retrieved from "https://monsterhunter.fandom.com/wiki/Black_Gravios?oldid=542188"
Community content is available under CC-BY-SA unless otherwise noted.