"A Vaal Hazak variant encrusted with spores that spew a torrent of toxic effluvium at any who draw close."
— MHWI Description

Blackveil Vaal Hazak is similar to its counterpart in terms of general appearance but the main difference is that it's covered in strange moss-like pustules that emit Effluvium constantly. These pustules even go as far to cover its head, rendering it blind. Should they be removed/broken however, it is able to see again. Contrasting regular Vaal Hazak's dark red and silver coloring, Blackveil has a green and milky-white coloring.

Blackveil Vaal Hazak is a passive monster, that only attacks when provoked. Like its counterpart, it mainly uses its Effluvium as a form of attack, but also as a form of finding prey and infecting other monsters. The moss that grows on its body can be spread about to infect not just monsters but its surrounding area as well, transforming the environment into its ideal area of operation. The pustules seemed to have changed its breath from the stream of concentrated Effluvium into a smog-like gas that can adhere to the ground temporarily. 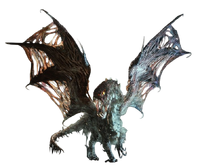 Vaal Hazak is a grotesque elder dragon inhabiting the deepest part of the Rotten Vale. It uses the fatal vapor of the vale in what appears to be some kind of symbiotic relationship.

Retrieved from "https://monsterhunter.fandom.com/wiki/Blackveil_Vaal_Hazak?oldid=804320"
Community content is available under CC-BY-SA unless otherwise noted.