Blangonga is a Fanged Beast introduced in Monster Hunter 2.

As the alpha-male of the pack, the Blangonga is twice as large as the average Blango with a much more aggressive temperament. Its strong, muscled limbs allow it to run and leap at a startling speed, and its powerful roar can catch hunters unaware without adequate hearing protection.

By calling out to its pack, the Blangonga can summon Blangos to fight beside it in battle. Its deadly speed can bewilder the novice hunter, as they can perform a dive that can send them rolling into their foes and deal out massive damage. Blangongas can break ice at their feet and hurl it at hunters to inflict a Snowman status, or break it into ice shrapnel that can send foes flying.

Blangongas are incredibly aggressive creatures. They will ruthlessly attack hunters and prey, yet shy away from anything larger than themselves.

Blangonga live in cold habitats. Their thick coat keeps them warm and serves as the perfect camouflage. 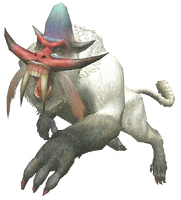 HC Blangonga appears quite different to the usual Blangonga. The traditionally orange features on its face are instead bright shiny red, whilst the head-cone is larger and a deeper blue. New attacks include a triple ice throw, greater ice breath with exceptional range and fast, well-aimed digging attacks. 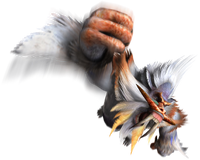 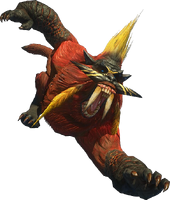 Retrieved from "https://monsterhunter.fandom.com/wiki/Blangonga?oldid=864140"
Community content is available under CC-BY-SA unless otherwise noted.