Blinking Nargacuga have shiny white scales and bright white fur on its body. Its underside is a bright red, together with red talons on its feet and hands. Its beak is gold in color. The blades on its wings shine a bright white, with red coloured tips. The spikes on its tail also are a white colour with red tips. Its tail end is a bright, shining red. Just like normal Nargacuga during a rage state, Blinking Nargacuga leaves behind red eye trails and it's tail spikes are in a constant state of being splayed out. It will also gain a red tint to its afterimages when it is enraged.

Blinking Nargacuga is very similar to regular Nargacuga when it comes to movements during battle, but with added effects to increase its lethality. For example, the teleportation attack common to G-rank Nargacuga is increased both in its radius and its damage. Another move that has been enhanced is one in which it will shoot out spikes that will rain down from the sky shortly afterward being fired. Instead of a small patches, a whole field of these poisonous spikes will come down covering a huge area. However, its most prominent change is a new ability to create blades of wind that will suck in hunters like a vacuum before shredding them.

Blinking Nargacuga is extremely aggressive. It will fight with unrivaled, swift ferocity, barely giving hunters any time to catch their breath. It is prone to combine attacks in quick succession in order to hit hunters as much as possible in short time windows. Blinking Nargacuga will also attempt to punish hunters who fail to I-frame certain moves such as the aforementioned "Vacuum Slash".

Blinking Nargacuga have only been found to inhabit the Great Forest Peak and on rarer occasions the Historical Site. 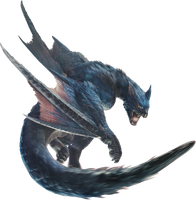