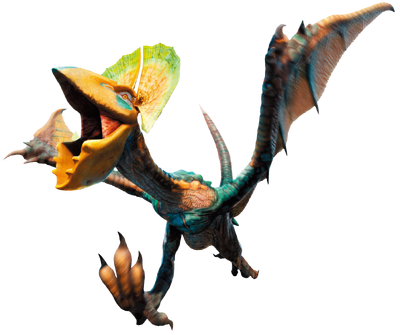 Although they are usually smaller than their pink counterparts, they are stronger and more aggressive. They are covered in an indigo carapace, and blue streaks can be found on its beak and ears.

Like the common species, Blue Yian Kut-Ku can shoot flaming projectiles from its mouth, and is capable of moving and attacking at quick speeds.

HC Blue Kut-Ku is very odd looking as its chin has grown a considerable size and used as an unusual weapon, It has been seen to lay pitfall traps for hunters making pits with its large chin. It has also gained better flying abilities as it will glide at extreme speeds and jump and hover in place for a moment to kick predators.

For details on older games this monster has appeared in, see Blue Yian Kut-Ku Guides.

Retrieved from "https://monsterhunter.fandom.com/wiki/Blue_Yian_Kut-Ku?oldid=849922"
Community content is available under CC-BY-SA unless otherwise noted.