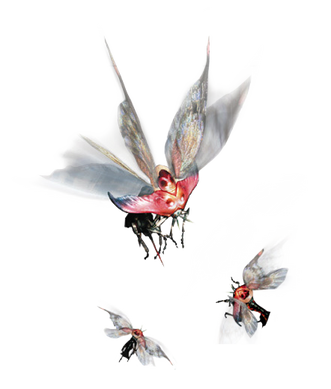 Bnahabra are similar to the Vespoid from previous generations. Bnahabra fly in a similar fashion and can also cause paralysis with their stingers. There are various subspecies of the Bnahabra which vary between the regions, each with distinctly colored wings. Bnahabra are often seen attached to the sides of the walls seemingly lifeless, until a hunter is close enough - then they fly away or attack.

Unlike the Vespoid, Bnahabra can shoot a corrosive liquid which will reduce a hunter's elemental resistance to Fire, Water, Ice, or Thunder depending on the region.

Retrieved from "https://monsterhunter.fandom.com/wiki/Bnahabra?oldid=844668"
Community content is available under CC-BY-SA unless otherwise noted.