Bombardier Bogabadorumu appear close to identical to normal individuals in Phase 1 with a few key differences. The dorsal spines are now a shining blue color with green edges. And when not prepped the tubing and the diamond like structure are now a dark grey, when prepped they turn a light green. The ends of its forelimbs are also now blue.

The fight remains mostly the same as the regular Bogabadorumu however the second phase and digging attack is absent. In exchange Bonbardier has a new attack where it inhales then breaths out a huge gas cloud right in front of it before detonating it, it adds on a bit to some of its existing attacks such as doing three claws swipes to create a cloud instead of two, and its gas clouds leave a red aftermath cloud which will also explode after a very short time.

Bombardier Bogabadorumu retains the aggressive behavior of the normal ones, attacking anything in sight.

These Extreme Individuals have only been sighted at the Historical Site. 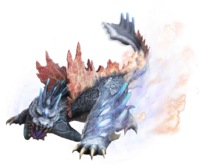