Brute Tigrex features a darker, more muted color palette of various shades of grey, brown, and beige. It apparently possesses a more robust set of lungs than the common species, as evidenced by its increased roaring capacity. It has a more powerful set of forelimbs, and has adapted to live in harsher environments than any other variety of Tigrex.

Brute Tigrex is capable of using its powerful forelimbs to trample opponents, and can produce incredibly concussive roars which can send nearby objects flying.

This subspecies will exhibit similar behavior to its common counterpart, but it is more brutal and aggressive when approaching and engaging prey and attackers alike.

Brute Tigrex is known to inhabit harsh environments such as Volcanoes and Deserts.

For details on older games this monster has appeared in, see Brute Tigrex Guides.

For carves and materials from other games, see Brute Tigrex Carves 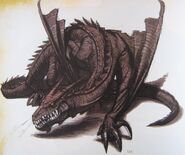