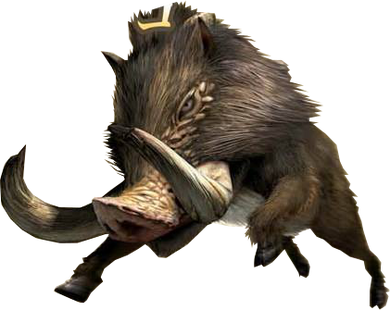 Bullfango possess extreme aggression, and will charge hunters on sight, unlike the more docile Mosswine which only attack in self-defense. Although veteran hunters can generally take them out easily, they can be dangerous for beginners and may even pose a threat to more experienced hunters when several attack at once. They can be extremely irritating when fighting a large monster in their territory; their charges may come unexpected from behind and knock the hunter to the ground, leaving them at the mercy of the larger monster.

These Fanged Beasts are sometimes found in packs and will charge at all intruders once noticed. They are very territorial, and can be a considerable nuisance.

Retrieved from "https://monsterhunter.fandom.com/wiki/Bullfango?oldid=844323"
Community content is available under CC-BY-SA unless otherwise noted.