Caeserber are large beaver like monsters mostly covered in light brown fur with four yellow streaks two running down their backs, two on the sides of their heads which contain crests. The parts that are not covered beit hide or the spines running down its back are prussian blue with some beige highlights in places and throughout its body are beige protrusions of varying shape and size, such as the spike like ones on its arms, the ones on its crest, and the four spikes on its flat tail.

Caeserber have a variety of physical attacks like claw swipes, body slams, jumping onto the Hunters, and rolling. It can also pick up logs with its teeth and swing them around, and throw rocks either with its hands or tail.

Caeserber are territorial and will attack any intruders. Like the mammals they resemble Caeserber create dams as a means of protection and as nests. They are known to bash down or chew through trees to eat the fruit they hold.

It lives in a wooded environment the Dawnwind Valley, spending a lot of time close to water sources. 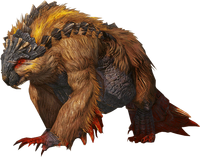 A Variant of Caeserber first appearing in Monster Hunter Online.