Caravaneer (Japanese 団長) is a Treasure Hunter found in Val Habar. He leads a traveling caravan that searches for hidden treasures in the world. 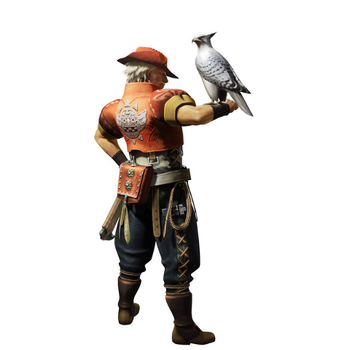 The Caravaneer has an adventurous type of personality, both exciting and cheerful. He takes risk in his work with little nonsense from others. The Caravaneer laughs at the face of danger. When drunk, he is said to be clumsy.

His early life is almost a complete mystery. However, it is said that he use to work for the Royal Paleontology Scriveners. Nowadays, the Caravaneer travels the world with his caravan in search of treasures. However, these adventures can sometimes turn dangerous or reveal hidden secrets about the past. One such instance was the discovery of Gore Magala and Shagaru Magala. Besides hunting for treasure, the Caravaneer is also a hawker.

The Caravaneer wears a rare set known only as Hawk Armor.

Retrieved from "https://monsterhunter.fandom.com/wiki/Caravaneer?oldid=748871"
Community content is available under CC-BY-SA unless otherwise noted.