Cephadrome have yellow eyes, yellow or pink fins and blue or purple scale covered skin. This skin appears brownish black due to sand covering their body. They have a flat, diamond-shaped head (much like a hammerhead shark or a Diplocaulus, an extinct prehistoric amphibian), fins, and tail, which helps propel them through the sand.

Their caution in fighting causes them to run away frequently by diving into the sand. They use hipchecks, tail swipes, and shoot sand streams to damage hunters.

While swimming they have been known to paralyze prey with their dorsal fin. Since they have excellent hearing, they can be stopped by a sonic bomb which will startle them out of the sand, similar to the Plesioth.

Cephadrome are very aggressive, but will assume evasive maneuvers if they sense that the threat is too dangerous.

Cephadrome can only survive in deserts. Their body shapes have adapted to swimming through the sands, and have become extremely streamlined. 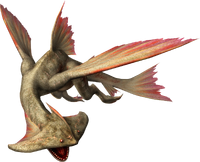 Cephadrome with a very shocking personality and appearance change, having red in their eyes, exposed Coral Cephadrome fins and a crest on their heads. Some also have gained the unusual ability to swim through sand with as little friction as possible built onto body on a microscopic level on its skin allowing smooth simple hops out of sand like its swimming to instantly standing on it like its solid again with its feet.

These leaders are no longer the once constantly retreating pushovers normal Cephadrome are sometimes considered. They are more commanding than average Cephadrome giving their pack direct orders mid combat unlike common Cephadrome.

These pack orders correspond with what attack it is performing such as team breath attacks where the leader has multiple pack members, all larger than a human spit sand beams at targets while the leader after its pack members spits a giant beam of sand its gathered while its pack distracts.

Other attacks include team digging attacks where the leader launches itself from underground and its pack members follow and do the same jumping and launching themselves from the ground, causing paralysis from the venom in their fin wings as they glide like Flying Fish through the air. More attacks are directly ordered from the leader's loud roars. The roars may knocks hunters back with pack members erupting from the ground around the leader.

At G-rank HC Cephadrome likes to keep its distance using an attack where it roars while flipping backwards, body slamming, and then slithers backwards while the pack members taking his orders from the roar, where he was previously standing, hitting hunters with surprisingly strong attack power. The leaded may use more beam attacks with its pack members as it uses its back-flip attack to keep its distance.

On a more personal behavior it has more aggressive behavior using normal Cephadrome attacks with almost no breaks, taking quick run and hit attacks at targets from sand swimming and a new super strong tail spin.