The Elder Dragon of Mist 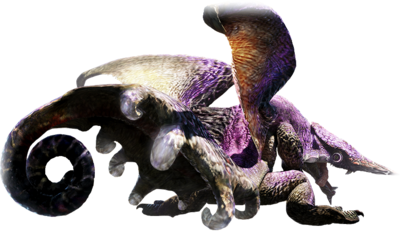 Chameleos's body is covered by a purple and white hide, and its head ends with a protruding horn at the tip of its nose. Its eyes are similar to a real life chameleon's; large and orb-like, with the ability to control eye movement individually. The long and elastic tongue can extend to grasp and steal items from a distance. Its wings are a purple color with a grayish white membrane, and are used for flight and controlling the direction of its poison fog. Chameleos's large tail is reminiscent of a leaf and has a curled, spiraling tip.

Chameleos has the ability to camouflage itself by using the electric currents running through its skin, refracting light in the mist and thus making its body invisible. This camouflaging ability is disabled if its horn is broken, and the tail severed. Known for using mist for protection, Chameleos's breath can create a thick fog to impair visibility as well as form dangerous toxic clouds. The stretching tongue is adept at stealing items from hunters, though this can be prevented with the Anti-Theft skill. It can also spit out acid blobs to reduce defense, and expel gas that inflicts stamina-lowering fatigue. Fanning its tail, it can cause High Pressure wind (much like Kushala Daora's wind barrier).

Little is known about Chameleos's behavior, but rare sightings claim it is peaceful and often avoids combat unless necessary.

Chameleos is found in tropical and subtropical locations, like the Jungle and Forest and Hills. Occasionally, it has been sighted in the Swamp. 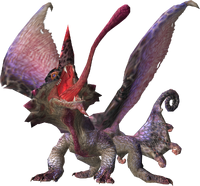 HC Chameleos has a pinkish tint on its body and different colored spikes. It gains new moves, including a combo move where it launches the hunter into the air towards it, then spits poison at them in midair. In addition, strange clouds of green gas appear in the area around Chameleos.

Retrieved from "https://monsterhunter.fandom.com/wiki/Chameleos?oldid=666288"
Community content is available under CC-BY-SA unless otherwise noted.