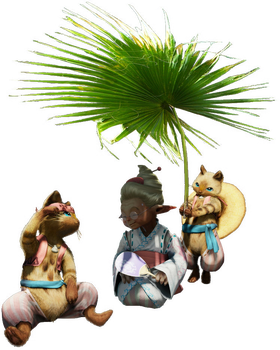 Cheeko Sands Chief can be best be described to have a calm personality. In the past, she was said to be different.

She once was a merchant who owned a ship, alongside her husband and her Felyne companions, before a tragic event happened. They sailed too close to the Ingle Isle, leading to an Akantor attacking the ship. Her husband protected the ship, however, he fell overboard. It is unknown what happened to him. One of the Felyne sailed the nearly destroyed ship to the beaches near the Primal Forest. Now the old crew call this place home, while Cheeko Sands Chief is still haunted by that day. Recently, Cheeko Sands Chief has started to look around world for any signs of her husband.

Retrieved from "https://monsterhunter.fandom.com/wiki/Cheeko_Sands_Chief?oldid=748897"
Community content is available under CC-BY-SA unless otherwise noted.