The Chief Researcher (Japanese 龍歴院の主席研究員) is a major researcher found within Bherna. 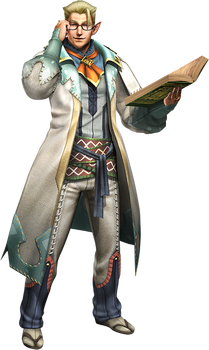 He is a calm and collective individual with a friendly way of speaking.

The Chief Researcher has a wide knowledge on a number of monsters that the Wycademy is aware of. He knows more than other researchers within Bherna, however, he doesn't know about some species from the Wycademy council's limited jurisdictions. From this, he is known to ask visitors, or other researchers not from Bherna, about monsters from faraway lands in order to perform further studies for the Wycademy. The knowledge he does have is shared freely throughout Bherna, including with hunters. The Chief Researcher also has began to research the Deviants.

The Chief Researcher wears a special uniform worn by members of the Wycademy with glasses and a number of badges on his clothing.

Retrieved from "https://monsterhunter.fandom.com/wiki/Chief_Researcher?oldid=748901"
Community content is available under CC-BY-SA unless otherwise noted.