Second
Congalala is a Fanged Beast introduced in Monster Hunter 2.

It resembles a giant, tailed gorilla with pink fur, a hippo-like head, and long front claws. The spike on its head is actually hair that the Congalala has smoothed into shape to signify that they are the pack leader. Congalalas are surprisingly intelligent beasts.

Despite their apparently adorable appearance, under no circumstances whatsoever should the Congalalas be underestimated. While they are for the most part very docile, they react well to the presence of herbivores, so long as they give a wide berth. They can quickly become aggressive to anything that disrupts feeding or startles them, for example, if they see hunters. When damaged enough, their rage mode is triggered. Most of their upper jaw will be red, as will their backside, which also discharges fart gas, and their aggression increases significantly.

In the Old World Congalala reside primarily in areas such as the Jungle, Old Jungle, and Swamp. Their New World counterparts can be found in the Primal Forest, Heaven's Mount, and Sunken Hollow. Their MHST counterparts are found in Peculiar Den. 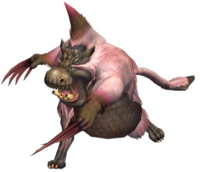 In Season 8.0, HC Congalala is introduced. It has a new move where it can hurl several large pieces of dung. [1]

HC Congalala has the ability release gas so strong that it causes dragon strength wind every time around it, knocking hunters to the ground. 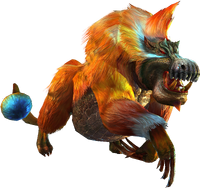 Monster Hunter Online introduced an April Fools quest with a Congalala as the target. This Congalala shows no odd signs initially, but upon entering Abnormal State it assumes the skeleton, animations, moveset and theme of Rajang will exactly fight and act like a Rajang.

For details on older games this monster has appeared in, see Congalala Guides.