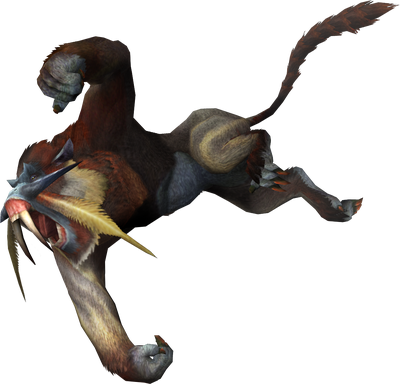 Due to the loss of its troop of Blango, it has grown larger and stronger. It has a brown coat of fur instead of the normal white coat. The Copper Blangonga's face is much less compact and houses a larger set of canines.

Instead of throwing ice blocks in the air, it hurls giant rocks across the ground and instead of using an ice breath attack, it uses a sand breath attack which will instantly put hunters or Felyne Comrades in the knocked-out state.

Retrieved from "https://monsterhunter.fandom.com/wiki/Copper_Blangonga?oldid=818324"
Community content is available under CC-BY-SA unless otherwise noted.