Crimson Qurupeco is a Bird Wyvern and a subspecies of Qurupeco introduced in Monster Hunter Portable 3rd. 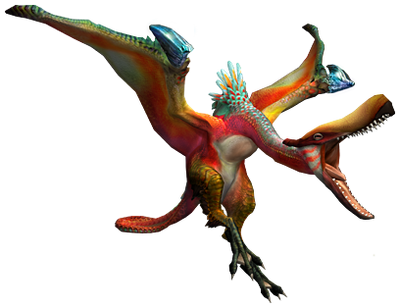 Instead of generating an explosion of fire, the flints spark together to create a large shock of electricity, capable of inflicting Thunderblight. This may be possible by using its unique wing talons and electrically conductive mucus. It is also capable of creating a bright flash, like Gypceros, to temporarily blind the hunter and any other monsters in the area at the time. Unlike the normal Qurupeco, this subspecies has a roar that requires the Earplugs Skill to block.

Its vocal sac is not clearly visible under normal conditions; however, it is apparent when the Qurupeco is performing a vocal. Like the original Qurupeco, this monster can give a heal or an attack or defense boost to the monsters around it. If interrupted during its song, either by a Sonic Bomb or dealing enough damage to the throat sac, Qurupeco's heal or boost can be applied to the hunters and their allies. One of its new abilities is a song which makes the monsters it summons instantly enter Rage mode.

It also seems that it is larger and more aggressive than the regular Qurupeco. The Crimson Qurupeco is also known to call both the green and the regular Nargacuga.

Retrieved from "https://monsterhunter.fandom.com/wiki/Crimson_Qurupeco?oldid=844012"
Community content is available under CC-BY-SA unless otherwise noted.